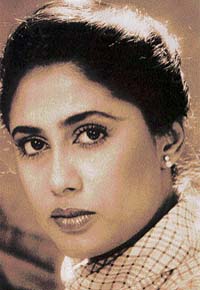 The original actor of the new-wave movement in Indian Cinema; the “Parallel Cinema”, would have been 60 yrs old today had it not been for her untimely sudden death at the age of 31 in 1986. She was one of the finest & the most graceful artist our country has ever produced. An actor with supreme “Matchless” talent in Theatre & Cinema- Smita was the recipient of 2 National Awards, a Film–fare award & a Padmashri. When I think of the female protagonists represented in Indian cinema, her name spells a woman who was triumphant; who never succumbed to society & its norms; a fighter who shook the yolk of male patronage; an intelligent matron not restricted by illiteracy. She did not emblematize a “Mother-India” under the hypothetical disguise of a typical traditional “Indian woman” but presented the psyche of those under siege of male dominance. Smita Patil was a true “Active” feminist who illustrated the cause of Social Up-liftment of Indian women. Her phenomenal contribution in her field can never be replicated. 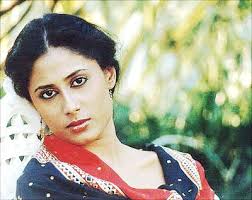 She was not a trained actor as many would believe. Bestowed with an inborn natural instinct for the craft Smita was an ace photographer before being discovered by Shyam Benegal. In reality her friends remember her as an astute urban person [it was mentioned that while working as a news reader for Doordarshan she would hurriedly drape her sari over her jeans]. Being born to parents of acute social awareness, she was an Idealist. Her dusky complexion added “Panache” to her unique personality which was equally gifted with a strong command over her voice. She appeared utterly disciplined in her work & it was hard to imagine that she had a slightly bohemian personal side.

Bhumika[1977] established her in the film-industry as the Queen of parallel cinema. Its story was inspired by 1940s Marathi actress “Hansa Wadkar”- a woman who is out to discover herself, often falling off the rails, yet back on her tracks- fighting loneliness, creative dis-satisfaction, her intimate fears & complexes; struggling in her middle age for self-fulfillment. At the age of 22, to portray such a complex character was a remarkable achievement indeed. How encouraging it must have been for the directors/writers who dreamt of creating a podium for meaningful cinema which gathered appreciation internationally as well? To have an artist who wasn’t conventionally bound! Someone who did not consider it obligatory to run around trees & shed tears of helplessness on screen! For 5 years Smita Patil refused to do commercial cinema. In Chakra[1981] she proved her forte once again where she essayed the role of an un-glorified, rural “migrant” laborer who fights for her survival in Mumbai. Her ability to accept the roles which had the shades of grey was clear when she worked in Arth[1982]. Her finesse as an actor stood out in front of the other stalwart of parallel cinema- Shabana Azmi. It is impossible to imagine any other artist who could have portrayed Praveen Babi’s insecurities, possessiveness, delusions, guilt & obsession for her man – as impeccably shown by Smita Patil. Her high-octane acting in the final confrontation scene between Pooja & Kavita can-not be shaken off from the minds of those who value the Stature of “Arth” in Indian cinema.

She proved her versatility once and for all when she ventured into commercial cinema with none other than Amitabh Bachchan in Namak Halaal[1982] & Shakti[1982]. She carried the roles forward with her own intelligence as she could not be seen as a woman of no substance- she efficiently played her roles opposite AB, never once seeming out of place -even providing her own signatory “class” to the rain songs with grace. I refuse to dismiss Aakhir Kyon[1985] simply for the reason that she attempted to bring forward the cause of an urban woman. It was not the village or the slum but the modern society this time – The “Plight” of a simple housewife who is left at the mercy of her husband who crumbles upon adultery. She tamed herself; carried make-up while excercising her original control over her capabilities as an actor. It is believed that she was disillusioned after a while with her progress in parallel cinema because of monetary factors; we did see her attempting “inconsequential” roles in Dance–Dance , Kasam Paida Karne Waale Ki (etc) and the only one which I can name as a solid one was that of Anil Kapoor’s Lawyer sister in Thikaana[1987]. She forayed back into her initial passion in 1985 with Mirch Masala – A cult performance where we witnessed on screen the querulous relationship between women in the labor groups. We had the feisty, fiery Sonbai who stood up against lechery while uniting her co-workers with “Mirch” powder in their bare hands to throw in the lewd eyes of the lecherous tinpot. She acted in over 80 Hindi & Marathi Movies including Bazaar[1983], Mandi[1983], Ardh-Satya[1983] Aaj Ki Aawaz[1984] Manthan[1976].

Smita  remained true to heart when it came to relationships as well. She fell in love with Raj Babbar & they both got married . Overnight she turned into a home-breaker; the critics labelled & targeted her as the latest vamp. And it didn’t take her long to succumb to an ill-fated post natal complication. She passed away on 13th Dec 1986. The actor who motivated film-makers to explore the role of women in Indian society; who endorsed their cause & issues through her impeccable work; who stood for the true empowerment of women in India left us with a legacy which can never be cloned. She left the country [ I would not attempt to state the film industry as the sole mourner] with a void which can never be filled. Smita Patil [ Oct 17, 1955 – Dec 13 1986] will remain the “pioneer” of world class acting in India. An actor who never makes me feel inferior as a cinema-lover when I witness the work of international Stars. She left us after “WAARIS”– without one from her own fraternity.